Professional basketball player from Moravia, Iowa who played for Iowa Cornets from 1978 to 1981 and for San Francisco and Columbus Ohio teams until 1984.

Biographical Note:
Monna Lea 'Molly' Van Venthuysen, born in Canada on November 13, 1957, was raised in the small town of Moravia, Iowa, sixty miles southeast of Des Moines. Her renowned basketball career began in her first high school game as a junior for the Moravia Mohawkettes when she scored sixty-three points on her sixteenth birthday. At seventeen, she was selected to participate in final try-outs for the 1976 U. S. Women's Olympic Basketball Team. As a student at Grand View College in Des Moines, Van Venthuysen continued to set basketball records. She graduated in 1978 with an associate degree in telecommunications. While playing for Grand View she married Dennis Bolin and had her first child, Damien. The Bolins divorced in 1982.

In 1978 Bolin was the first player to sign with the Women's Basketball League (WBL) when she joined the Iowa Cornets, founded by George Nissen of Cedar Rapids. She became known as 'Machine Gun' Molly for her remarkable scoring records. The Cornets folded in 1980 after two seasons. For a short while Bolin continued to play for other professional teams, all of which failed to survive the financial problems of women's professional basketball in the 1980s. She left the Cornets to play for the Southern California Breeze in a new league and when it folded after a few games, returned to the WBL and the San Francisco Pioneers to complete their final season. In the summer of 1984 she was selected to a USA All-Star Team which included former Olympians and professional players for a tour of exhibition games to prepare the U.S. Women's Olympic Basketball Team that eventually won the gold medal. Later that year a new professional league was formed, the Women's American Basketball Association (WABA). Bolin played for the Columbus Minks during the league's first and only season. Bolin attracted national fame when she was featured in Sports Illustrated in April 1981 and NBC's SportsWorld in 1984.

Although her professional career ended in 1984, Bolin's strong commitment to women's basketball never flagged. She continued to promote the concept of a women's professional basketball league and conducted clinics until 1995 when she was hired by Liberty Sports (now known as Fox Sports) to develop and produce a Women's Pro Basketball 3 on 3 Tournament for television. Shortly thereafter, the men's National Basketball Association (NBA) announced its involvement in the forming of a new women's league, the Women's National Basketball Association (WNBA).

The Molly Bolin papers date from 1972 to 1997 and measure 4 linear inches. The papers are divided into four series: Biographical information, Career, Photographs, and Artifacts.

The Career series (1974-1995) includes materials from her high school days through her post-professional activities, such as newspaper clippings; an audiocassette of the Moravia-Albia district semi-final on KCOG in February 1975; a Cornets scrapbook; and a videocassette of professional basketball games, Cornet Christmas party skits, the Iowa Basketball Hall of Fame award ceremony, and the NBC SportsWorld interview on November 17, 1984.

The Photographs series (1972-1996) is comprised of prints and photocopies of photographs of Bolin's family and career.

The Artifacts include six T-shirts, one warm-up jacket, four plaques, and an Iowa Cornets souvenir razor. 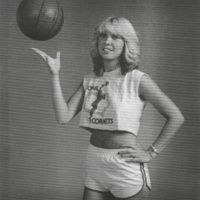