Professional basketball player and coach who played for the Iowa Cornets and the New Mexico Energee.

Biographical Note:
Rhonda Ann Penquite graduated from Ankeny High School in 1974 after moving to Ankeny, Iowa, from Des Moines in the 6th grade. At the time of her move, Des Moines schools did not offer a basketball program. The move proved significant for Penquite's future because her success as a high school player provided a starting point for a variety of experiences and opportunities available through basketball. In high school, Penquite received numerous honors including being named to the all-state team and an unanimous all-conference choice as her team advanced to the first round of the state tournament her senior year. She was also the Amateur Athletic Union (AAU) runner-up free throw champ and an AAU all-American.

Her college career included two years at Grand View College in Des Moines and one season at the University of Nevada-Las Vegas, ending her college basketball career at Oral Roberts University in Oklahoma. She received all-American honors at Grand View College and became the first woman at Oral Roberts to be named an all-American. During this time, she also traveled to Central and South America and the British Isles on a "basketball ministry" with the Youth Enterprises organization. Penquite competed professionally for three years, 1978-1980, in the Women's Basketball League (WBL) and the Ladies' Professional Basketball League (LPBL). She played for the Iowa Cornets (WBL), founded in 1978 by George Nissenof Cedar Rapids, and later for the New Mexico Energee (LPBL). Both leagues were short-lived due to financial problems. While playing for the Cornets, Penquite resumed her undergraduate education at Drake University, graduating in 1981. She returned to Oral Roberts University in 1986 as the head women's basketball coach, a position she held for three years.

On July 30, 1998, the Naismith Memorial Basketball Hall of Fame in Springfield, Massachusetts, opened a new exhibit, "Heart & Soul: The Trials and Tribulations of Women's Professional Basketball." Penquite donated personal items from her time with the Iowa Cornets and New Mexico Energee for the exhibit. Photographs ofthe exhibit opening document this "gala event."

Rhonda A. Penquite currently resides in Des Moines, Iowa, and works as an independent beauty consultant for Mary Kay Cosmetics.

The Rhonda Penquite papers date from 1967 to 1998 and measure 5 linear inches. The papers are divided into four series: Biographical information, Career, Photographs, and Artifacts.

The Biographical information series (1967-1968 and undated) is comprised of her sixth grade class picture in the elementary school yearbook and her business card for Mary Kay Cosmetics.

The Career series (1971-1989) includes materials from her high school days through her professional activities, such as newspaper clippings; a scrapbook documenting her year playing for Oral Roberts University, her summer basketball ministries and the Iowa Cornets; game programs and media guides, and correspondence pertaining to the Naismith Memorial Basketball Hall of Fame opening in 1998.

The Artifacts include two banners, two T-shirts, and an Iowa Cornets jacket. 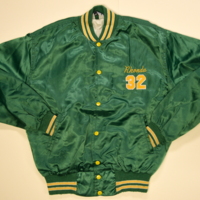