Biographical Note:
Gwendolyn Johnson Hein, basketball player, seed store operator, and farm woman was born in 1911, one of four children of William and Emma Johnson of Newhall, Iowa. During her childhood, she spent weekends playing with siblings and neighboring friends, coasting, riding horses, and playing ball. As a teenager, she remembered "wearing out the carpet" with dancing," to her mother's piano playing or records. While attending Newhall High School, she took speech classes, took part in musicals and plays, and gave an oration at graduation. Along with her friend Luella Gardeman Boddicker, she joined the school basketball team that played a three-court game.

After the 1924 state girls high school championship tournament, the Iowa High School Athletic Association announced they were eliminating the state tournament for girls basketball. Gwen Johnson and Luella Gardeman rode horses from farm to farm to convince neighbors to support the continuation of girls basketball tournaments. Before the next year, school officials founded the Iowa Girls High School Athletic Union that sponsored the 1925 tournament. Newspaper accounts of Newhall's victory in the 1927 state tournament are located in the collection.

Hein went to Coe College in Cedar Rapids for one year. While there, she played intramural basketball, softball, field hockey, and studied tap dancing. The financial crisis of the Depression ended her schooling. She married Hugo Hein in 1941 and they raised three children, Russ, Kay, and James on a farm. In 1965, Hugo and Gwen opened a seed dealership in Stanwood, Iowa that Hugo ran until his retirement. Gwen Hein continued to live in Stanwood after Hugo Hein died in 1997.

The Gwendolyn Johnson Hein papers date from 1892 to 1997 and measure 1.5 linear inches. The papers consist of newspaper clippings regarding the 1927 Newhall High School girls basketball state championship win in 1927, family photographs, a high school autograph book, and a five-year diary from 1961 to 1964 complete the collection. The diary entries note many sports and social activities as well as farm work. 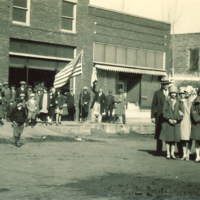