Adel, Iowa native who was an accomplished high school athlete in the 1970s.

Biographical Note:
Julie Goodrich was an accomplished high school athlete in the early 1970s from Adel, Iowa. She was actively involved in the fields of basketball, track and field, cross-country, and softball. In basketball, admittedly her favorite sport, she was a forward on the Adel Tigerettes girls' varsity team for four years, and her team's number two shooter. She received numerous awards from the Adel Community Schools and local sponsors, and was chosen to participate in the all-conference basketball team two years in a row. She was also an all-conference softball player and track star. Her name and picture frequently appeared in the Des Moines Register and Dallas County News, where she even received fan mail. The Dallas County News described her as "a very determined girl who doesn't know what it is to quit or give up." As testimony to this description, in 1973, her junior year, she was a pitcher on her softball team, a quarter-mile runner in track, and a forward on the basketball team, as well as being inducted into the National Honor Society, performing in shows as a tapdancer, and teaching swimming with the Red Cross. This was the year her basketball team made it to the Girls' State Tournament, where they came in second. When she returned from the Tournament, sick with measles and strep throat and afraid of missing out on the State Track and Field Championships, she told a Dallas County Reporter, "I gotta get going. I haven't been too hot this spring." Larry Niemeyer, her coach for both basketball and track, said that the track team's chances of winning the state title improved with Goodrich being there. She was appreciated by her teammates not only for her prowess, but for her unselfish team spirit. In an article Goodrich wrote, called "Adel Tigerettes Live a Dream Come True" (see Box 1, Scrapbooks, Photocopied, 1973 State Tournament), she recounts in the style of a fairy tale the history of her basketball team in 1972 and 1973, which culminates in their performance at the State Championship, then "living happily ever after."

The Julie Goodrich papers measure 1.5 linear feet and date from 1948 to 1977. Most of the papers date from 1970 to 1974, when Goodrich was in high school. They are organized into six series: Scrapbooks, Personal, Photographs, Publicity, Family papers, and Iowa girls' sports. The papers document Goodrich's involvement with girls' sports in Iowa in the early 1970s.

The Scrapbooks series (1969-1974) contains the nine scrapbooks that Goodrich kept while she was in junior high and high school, which form the bulk of the collection. Two of the scrapbooks were preserved in their original state. The other seven were photocopied and then disbound. The items removed from these scrapbooks were then arranged into series. In her scrapbooks she organized newspaper clippings, press releases, photographs, sports records and statistics, and correspondence relating primarily to her athletic activities. The photocopied scrapbooks dated 1970- 1971 and 1971-1972 are in their original covers, which are examples of common designs of the early 1970s. Goodrich kept two scrapbooks during her senior year, 1973-1974, both concerned with sports.

The Personal series (1970-1974) contains the awards, correspondence, and memorabilia removed from the scrapbooks.

The Publicity series (1970-1974) contains the promotional and statistical material related to the sports events in which Goodrich participated. In this subseries is one 16mm film from Wolper/NBA Films that lasts several minutes and shows Goodrich playing basketball at the 1973 State Tournament.

The Family papers series (1948) contains one memory book that Goodrich's mother kept during her last year in high school in Linden, Iowa.

The Iowa girls sports series (1967-1977) contains all the programs and statistical booklets that Goodrich collected concerning games she did not participate in as an athlete.

The papers are open for research. Copyright held by the donor has been transferred to The University of Iowa. 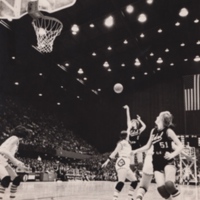