High school basketball player who sued the Iowa Girl's High School Athletic Union to be allowed to play on the school team after marriage.

Biographical Note:
Jane Ann Christoffer was born December 31, 1955 in Emmetsburg, Iowa. Her family moved to Ruthven, Iowa where she became an outstanding participant in six-on-six girls´ basketball. As a sophomore Rubel took the Ruthven Consolidated High School team to the state tournament, having scored 46.7 points per game and hitting 60 per cent of her shots for the season. Christoffer married Kenny Rubel in her junior year, subsequently giving birth to daughter Jennifer. When she returned to play basketball her senior year the Iowa Girls´ High School Athletic Union forbade Jane Rubel's participation, quoting a rule that a "student is ineligible for any Girls Union-sponsored activity after being associated with a marital status . . . ." Rubel filed a $125,000 damage suit in federal court. Rubel had the full backing of the Ruthven school administration and community and also the service of the American Civil Liberties Union. In November 1971 the girls´ union Executive Secretary E. Wayne Cooley and the union´s board repealed the seventeen-year old ruling which forbade married mothers from interscholastic competition. Rubel played her senior season, averaging thirty points a game and leading her team to within one game of the state tournament. The Rubels have two children. Jane Rubel later became postmaster in Ruthven.

The Jane Christoffer Rubel papers date from 1971 to 1993 and measure one linear inch. The papers contain the official document describing Rubel's lawsuit against the Iowa Girls' High School Athletic Union; a letter of acknowledgment of the discrimination suit from the Department of Health, Education, and Welfare; newspaper clippings; letters of support; and a transcript of a Channel 9 KCRG editorial.

The papers (donor no. 474) were donated by Jane Christoffer Rubel.

The papers are open for research. Copyright held by the donor has been transferred to The University of Iowa. 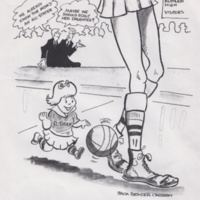 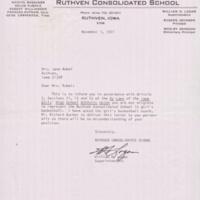